01:30:00
A 22-year-old engineering student was beaten up by a group of people for allegedly posting derogatory remarks on Facebook about Kannada filmstars protesting over Cauvery issue on Saturday. Santosh, a resident of Sriramapura, is pursuing an engineering course from a private college in Banashankari in Bengaluru. 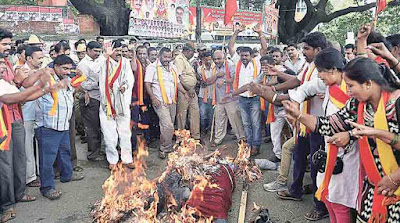 Santosh reportedly posted derogatory remarks against actors Shivarajkumar, ‘Duniya’ Vijay, Ragini Dwivedi and Darshan. He was advised by his friends not to post such messages but he did not heed their advice.

He was caught by a group of people after he reached college on Saturday afternoon and was given a ‘public thrashing’. He later apologised to the assailants and fled. Girinagar police reached the spot after the incident took place. To know more : http://goo.gl/DgvXkS
Share on Facebook
Share on Twitter
Share on Google+
Share on LinkedIn